Our team tries to solve fundamental problems associated with the use of the use of heterogeneous technologies (CMOS+III-Vs) for the implementation of high-performance circuits. We also investigate techniques for wideband (self-)interference cancellation for simultaneous-transmit-and-receive applications.

Our research approach involves a mix of theoretical investigations and experimental research. We are also actively collaborating with sponsor companies to use their technologies as well as receive guidance regarding potential applications of the research.

We have devised new techniques for wideband interference cancellation through the implementation of wideband true-time-delay through switched capacitor approaches.

We are also evaluating the HRL T-3 GaN process for our heterogeneous integration work. 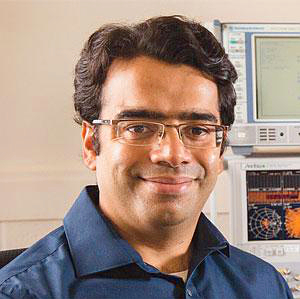 Harish Krishnaswamy (S’03–M’09) received the B.Tech. degree in electrical engineering from IIT Madras, Chennai, India, in 2001, and the M.S. and Ph.D. degrees in electrical engineering from the University of Southern California (USC), Los Angeles, CA, USA, in 2003 and 2009, respectively. In 2009, he joined the Electrical Engineering Department, Columbia University, New York, NY, USA, where he is currently an Associate Professor and the Director of the Columbia High-Speed and Millimeter-Wave IC Laboratory (CoSMIC). In 2017, he was a co-founder of MixComm Inc., Chatham, NJ, USA, a venturebacked startup, to commercialize CoSMIC Laboratories advanced wireless research. His current research interests include integrated devices, circuits, and systems for a variety of RF, millimeter-wave, and sub-millimeter-wave applications.

Dr. Krishnaswamy has been a member of the Technical Program Committee of several conferences, including the IEEE Radio Frequency Integrated Circuits Symposium since 2013 and the IEEE International Solid-State Circuits Conference since 2015. He currently serves as a member of the DARPA Microelectronics Exploratory Council. He was a recipient of the IEEE International Solid-State Circuits Conference Lewis Winner Award for Outstanding Paper in 2007, the Best Thesis in Experimental Research Award from the USC Viterbi School of Engineering in 2009, the Defense Advanced Research Projects Agency Young Faculty Award in 2011, the 2014 IBM Faculty Award, the Best Demo Award at the 2017 IEEE ISSCC, the Best Student Paper Awards (First Place) at the 2015 and 2018 IEEE Radio Frequency Integrated Circuits Symposium, and the 2019 IEEE MTT-S Outstanding Young Engineer Award. He currently serves as a Distinguished Lecturer for the IEEE Solid-State Circuits Society.